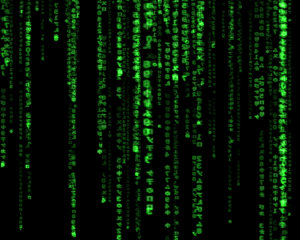 Large hands type on a keyboard; out of sight a printer springs to life and green code cascades down the screen. I can make out a few lines of barely intelligible text; it is Fortran and we are in GIStemp. Agent Smith jumps up and pores over the printout, shakes his head then returns to the keyboard to write a patch that will allow the code to read a file of new data.

In this version of reality Agent Smith is not a malevolent product of the code itself, but he might be “the one”. Experienced programmer and self-confessed geek, he has been exploring GIStemp for the best part of a year – on and off. He’s not the first outsider to run the code, but his attention to detail is astounding. In fact he is one of many;  he chooses to share the process with the world to allow review, verification and replication. He believes the days of the consensus are numbered.

“You hear that, Mr. Hansen? That, is the sound of inevitability”.

Agent Smith can see things for what they really are; green code rains down the screen. “That” he says “is STEP1, which does a splice and dice – it tries to make long lived smooth records out of the disjointed records between site moves. STEP2 does the UHI adjustment and drops any records under 20 years duration.” That is what we’re interested in, but we haven’t got there yet.  Not exactly anyway. Agent Smith is focussed on the journey; the rest of us are more interested in the destination.

Agent Brown‘s formidable talent is historical data, specifically why the code has ignored, conveniently, some of the very oldest data available and what these say about past temperatures.  He is also very sure about the effects if we allow this alternate reality to continue.

“Climate models” Agent Brown explains “are a computer generated dreamworld, created to keep us under control, to turn us into mere tax sources, into copper-bottomed government investments.”

The Oracle has also been with the Resistance for a long time, before my time in fact. She enlightens us:

“Do not try to bend tree ring data into a hockey stick, that’s impossible. Instead, only try to realize the truth…that there is no hockey stick.”

Me? I’m Agent Jones. I’m just the new kid here.  I’m an observer who tries to help when she can.  Perhaps I do myself an injustice, but I want what they want. I want to reach out to all those who think that “ignorance is bliss” and to say to our nemesis The Goracle “We’re going to show these people what you don’t want them to see. We’re going to show them a world without you. A world without rules and controls…. where normality is possible.

Now do you want to take the blue pill and “believe whatever you want to believe” or the red pill and find out how deep the rabbit hole goes?

In the making: GIStemp Revolutions

This entry was posted in GIStemp, Humour and tagged GIStemp. Bookmark the permalink.