I recently decided to see what information could be obtained from the unadjusted GHCN temperature data. Simple averaging of all the data does not work because stations come and go. For example the ending of a temperature record in Barbados and the simultaneous starting of one in Siberia would introduce a ‘step change’ downwards.

Accordingly data from each reporting station is usually allocated to a geographic ‘cell’ on the surface of the Earth to ensure all parts of the globe are equally represented.  Each cell is analysed and a trend calculated, and then the results for all cells combined to give a global result. Whilst attractive, this method is very time consuming, and decisions on the weighting given to each station provide an opportunity for claims of bias.

I decided on a simple method that eliminates the ‘step change’ problem without incurring the effort in allocating each station to a cell.

In essence I calculated the temperature change, year on year, for each station. These changes are averaged for each year, and these averages are then summed to ‘integrate’ the annual anomalies back to a long-term anomaly. Here’s a summary of what was done for anyone who would like to try it:

The results are plotted agains the number of stations used in reporting temperature to GHCN in any given year (Figure1). 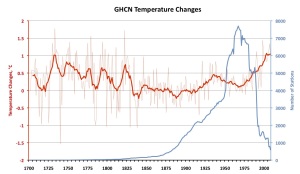 Figure 1. Temperature changes in data averaged from the GHCN database since 1700.

The unadjusted result suggests that current temperatures were previously seen in the 1730s.

Whilst open to criticism of under- and over-representing parts of the globe (most of the stations are US-based, for example) it does include all the data available and weights each station equally.

[I saw Andrew’s link to his graph under comments in Jeff Id’s post on CRU data analysis and I wanted to show it here mostly as it is a slightly different approach than many people have taken. VJ]