This started out as a discussion point following E.M. Smith’s blog post Mysterious Madagascar Muse. The jist of the original article centred around the availability of data after 1990 in the GHCN dataset and the NASA/GISS treatment of temperature on the island. Well Madagascar has a bit of a further story to tell. I had offered to plot a ‘spaghetti’ graph of the temperatures from the ten stations used on Madagascar, and this has proven interesting as an example of how data is adjusted and filled in by GISS.

To start, the annual mean temperatures plotted on a graph (Figure 1) show clearly the differences between the stations – Antananarivo is high altitude and relatively cool, with a cooling trend; of the other stations, some have cooling trends, most are warming. Also noticeable is the very sparse data after 1990. Note the darker blue data for Maintirano, of which more later. 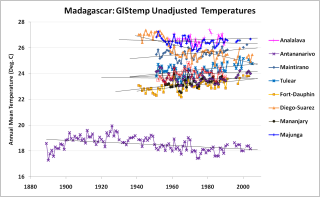 With such temperature differences between sites, obviously you cannot just average the temperatures. This is what it looks like if you do (Figure 2), and it clearly does not work as an average temperature for the island. 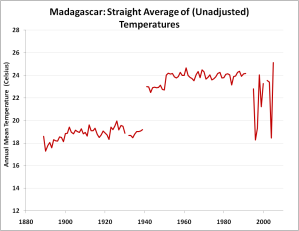 Normalizing each of the temperature series by calculating the mean temperature for that station for the baseline period of 1951-1980 allows plotting of an anomaly-based ‘spaghetti’ graph (Figure 3). This shows what looks like warming-cooling-warming climate cycles very clearly and it is possible to fit a third order polynomial trendline though the averaged data. I’ve seen this again and again for data I’ve plotted around the world (incidentally these were for WUWT regular TonyB). 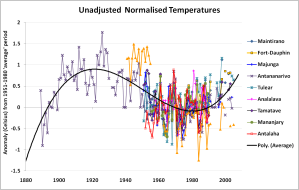 Now for the interesting bit – how GIStemp adjusts the data. GIStemp takes rural datasets and uses them to correct for urban warming. In this set of ten unadjusted stations there were three rural ones: Maintirano and two overlapping but separate ones for Antalalava (why kept separate?). In the homogenized set, only Maintirano, which has a large warming trend of 1.16 deg. C/century, remains unadjusted and all the other stations (Figure 4) have the trend increased – it seems to match Maintirano.

E.M.Smith finds seven other rural stations within 1000km that may contribute to homogenization. They also show cooling to about 1965-1975, then a warming trend. This is lost from the homogenized data. 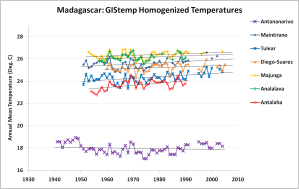 So overall what effect does homogenization have? – well a big one. Having started into a better understanding of calculation of anomalies, I decided it was better to leave that for the present, but a straight average of the normalized unadjusted and homogenized overlaid with a 10 year moving average for each (Figure 5) shows just what homogenisation does for the ‘anomaly’ value for Madagascar calculated this way – it stabilises the base period and significantly warms the subsequent years. 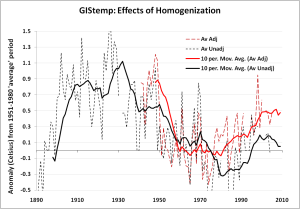 Given that several of the stations show a cooling trend prior to homogenization, and that UHI correction should NEVER be in the wrong direction, this is nothing short of scandalous.

I originally looked at the temperature trends using a database that has been developed over the last two months, but when I checked for any up-dated data on the GISS site, I found the trends were different (Table 1). We’ve now found the reason for that and that is worth investigating in its own right. The answer is simple – bad data. The database QC system throws out any year with missing months of data, and after 1990 the data in most of the Madagascar stations is patchy at best, so the database ignored the data in plotting the temperature trends. It is amazing how much warmer Madagascar is with that patchy data included.

One final thing. Even the patchy data stops in 2005, so after this date Madagascar too gets ‘filled in’ data from elsewhere – it seems from the rural stations up to 1000km away – again. And even the stations used to ‘fill in’ have patchy data – many have a gap then ONE DATA POINT in 2009. This is unbelievable. Rather than give an example, check the station hyperlinks below for yourself: