Just a thought after the previous post on GISS using updated satelite nightlight adjustments for urban/rural discrimination…. what about the future?  Is this something that should be updated regularly for population growth in rural areas, and if so might not today’s green technology revolution throw a spanner in the works?

I happened to walk past men replacing streetlights today.  LED streetlights are the next big thing.  They have really taken off in the U.S., with many major cities carrying out high profile trials and planned replacements – including LA, New York  and the LED City Program (Boston, Raleigh, Anchorage, Toronto and Valdez etc.) 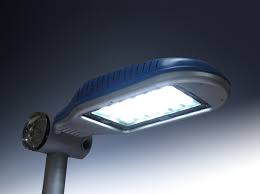 LEDs (light-emitting diodes) use less energy and last longer than the sodium vapor-powered lights typically used in urban street lighting. LED technology has been around for decades, and is often found in electronic gadgets. It is used in streetlamps in some European cities. Unlike regular streetlamps, LED lights can be programmed to respond to specific commands, so they offer adaptive lighting and controlled, variable brightness.  This offers possibilities of turning down lighting in certain areas, say after midnight, or having sensor based control so that the road brightens ahead of movement.  According to the U.S. Department of Energy, rapid adoption of LED lighting in the U.S. over the next 20 years can:

You can see the attraction for cities that are being told they need to be green and save money.  But installing LED streetlights is not a cheap option.  Despite the energy savings and reduced maintenance and replacement costs, there can be a long pay back on the investment and many see drawbacks (e.g. in Australia here)
There is a video here of a trial in Italy (included mostly because I like Eric Andersen’s Blue River).

I wasn’t intending to debate the merits of the technology, my thought was of its effect on light pollution, particularly as detected by satellites. Gone will be the diffuse orange glow of sodium vapour lamps, which I for one won’t miss, but LEDs are often brighter. Even if they reflect more light where it is needed – downwards, what will that do for how urban areas look from space – brighter or not?  Some areas could be dimmer at certain times.  If there are major differences, how would you discriminate easily between areas with old or new technology? [Update – see comment from E.M. Smith on previous thread.  In my haste to get this written and posted, I didn’t want to go OTT on different lamp types, but he’s right on mercury vapour lamps.]

But I’m just being silly here. The recent updates use nightlights data from a 1997 publication. Next update when? By the time this technology is widespread enough to have an effect in, oh say 10 years or more, we’ll have better solutions for urban/rural discrimination, or we will know one way or the other whether catastrophe is staring us in the face or was a big cry of wolf.