There is current interest in Eureka on WUWT and that is one of the stations I’ve been looking at recently. I was interested in comparing the data available from Environment Canada with that used by GISS and I’ve been working on the stations featured in the previous post (here), but here’s what the data says about Eureka.

The first puzzle was that the GISS data did not exactly match with that from Environment Canada (Fig.1 left). However, once the anomalies (calculated from monthly average, Annual D-N) are calculated (Fig 1. right), there are only a few differences, although some of them are substantial.

This appears to be similar with other stations – although there are often large differences in the absolute temperatures between the data sets, the anomalies are often in close agreement. Go figure that one!

Eureka, Alert, Resolute, Baker Lake and Coral Harbour (Figure 2) are represented in both data sets with data in the last two decades. Alert is missing from the recent GISS data, with data up to only 1991. There are other stations in the area currently reporting into GHCN/GISS, for example Clyde River on the East of Baffin Island but there is no monthly data for this station at Environment Canada.

Figure 3 shows the anomalies for all five stations using data from Environment Canada.  The graph from GISS data is almost identical, except that there is no data for Alert after 1991.

The justification for using sparse data to calculate tha global annual mean temperature is the correlation between annual temperature variations at pairs of stations as reported by Hansen & Lebedeff 1987 (right, for 64-90N)

So what sort of correlations are there with these stations? Lets look at Eureka, Resolute and Alert first, since Alert is missing in GIStemp after 1991. These are correlations of anomalies, not absolute temperature:

So far so good,  but what do the differences look like visually? 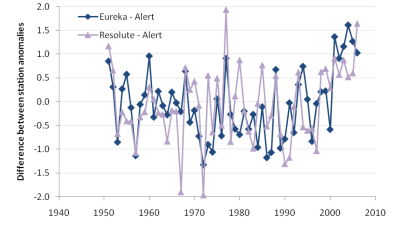 Figure 4. Differences in annual temperature anomaly values for Canadian Arctic stations
So that is what a correlation of 0.77 means in terms of annual agreement. Note the 1-1.5 degree divergence between Eureka and Alert since 2001.  The anomalies for Alert and Eureka in the period are:

At the 1200km smoothing radius the influence of Eureka is greatly magnified. With Alert added back into the the GHCN dataset as used by GISS, there would be a lighter yellow anomaly patch adjust to the northwest of Greenland in the area around Alert.  Or would there? This is unadjusted data I’ve been looking at.  Now generally rural data such as that from these stations is not adjusted, but it is subject to a certain amount of homogenisation at the griding step (GIStemp Step 3) as data from the various stations is blended, the effect being weighted by distance. Would Eureka or other stations with greater anomalies be close enough to pull the anomaly for Alert back up into that warm orange 1-2 degC category?