Hide the Decline – Data at Orland is Chopped

It seems this is not so much “Hide the Decline” as “Drop the Estimates” (see comments)
– Graph of USHCN adjustments compared with GISS now added, then corrected.}

The data from the weather station at Orland, CA – ‘posterchild’ station for www.surfacestations.org has been modified again. The modification throws away early years of data that are warmer than more recent temperatures.  Is there any justification for this?

Anthony Watts and a network of volunteers at http://www.surfacestations.org have so far examined 1003 of 1221 stations in the USA and rated them for their compliance with the NOAA/NCDC station quality ratings. Orland is featured as a stable rural station:

The Orland USHCN station is located behind the Orland Water Users Association off of 8th Street in Orland CA. It has the distinction of being well sited, and having been in the same location for over 100 years. It also has not been badly encroached upon by UHI as the community has not grown significantly during the period.

The version in USHCN and its modification by GIStemp were captured in the blink comparison below dated 29/12/2008 (full station data for Orland at Surfacestations.org). There is also a good history of investigating alteration of Orland data by Steve McIntyre, with his customary thoroughness, here and here.

However, the current GISS Station Data for Orland has been truncated, changing the station’s contribution to the surface record yet again.  Figure 3 below shows an overlay of current data on a graph of station data prepared using Alan Cheetham’s graphing software and 2009 GHCN download (Climate Data Visualiser) at Appinsys. 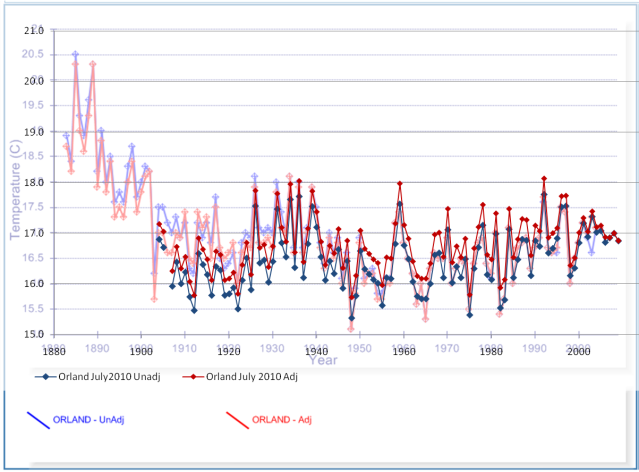 With the current GISS adjustment the older data is warmed slightly, reducing the trend in line with compensation for UHI, but what the overlay shows is that the  unadjusted data had been made cooler in the past anyway and even when adjusted the data in 1905-1930 is cooler than the previous GHCN version of the data.  This creates a warming trend to present.

What about local stations?  Orland tracks quite closely with Chico Univ Farm and Willows 6W.  Willows 6W is truly rural, only ~17 miles away according to the GISS data, Chico Univ Farm just over 20 miles away is, just as its name suggests, on an agricultural station to the south of the city. Red Bluff/Mun (28 miles to the north) and Ukiah (68 miles south and west) are towns with populations just over 13,000 and 15,000 respectively.  Ukiah is outside of the Central Valley, closer to the coast, and cooler; it is included under the same 5-digit WMO Station number (72591). Oroville Usa, Redding Wso and Marysville (beside Yuba City in Figure 5 below) are all closer than Ukiah. 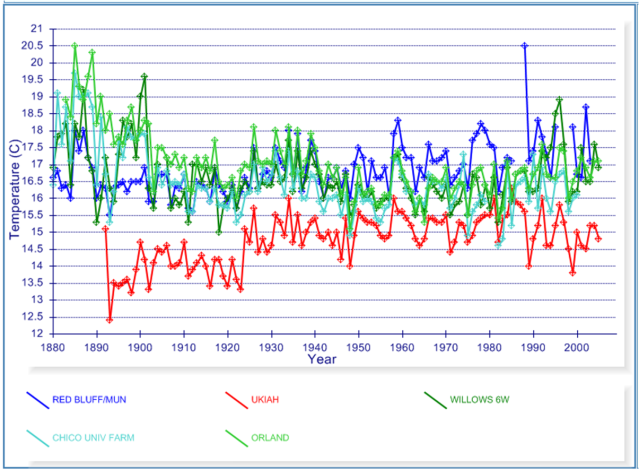 Using the USHCN Map Interface to look at relative locations (Figure 5) of the stations, Red Bluff is not a USHCN station (nor is Oroville). 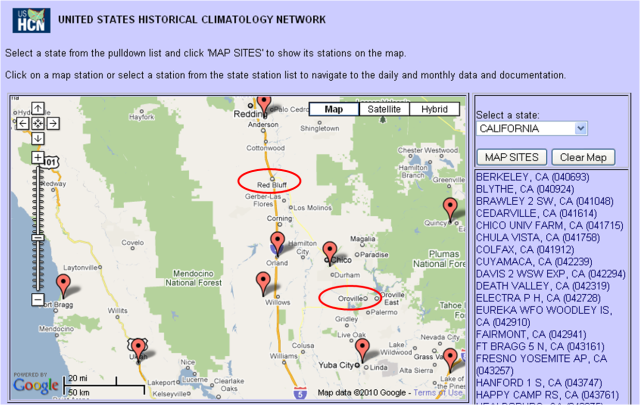 So how are the other stations treated? Well I’m sorry to say there is truncation here too, and not in a way that makes any sense, but more of that later. The start dates for each location’s station data by GISS are:

So we have truncation of early data first by USHCN then further by GISS. The usual justification for truncation by GISS – that of lack of sufficient rural stations in early years –  cannot apply (even after changes due to Nightlights Radiance) as Red Bluff is not truncated, nor is Oroville (start date 1884).

The data and adjustments,  first by USHCN (for Orland)…..

…then by GISS (After combining sources at the same location (unadjusted); After cleaning/homogeneity adjustment).  Although expecting GISS to use the USHCN output as input to GIStemp, a brief comparison suggests that none of the USHCN datasets fully match the GISS combined or adjusted data for Orland.  This could be a simple error on my part – I’ll check and update [update 17 Aug – see below].

The GISS adjusted anomaly plot for each station (Figure 6) shows how well the homogenisation has, er, homogenised the data.  I haven’t added trendlines but the adjusted trends are similar for all the N. Central Valley stations – 0.41°C/Century (Willows 6W); 0.55°C/Century (Chico); 0.58°C/Century (Orland); 0.65°C/Century (Red Bluff). Are microclimate responses to variations in temperature that uniform? I really don’t know but instinct says surely not? 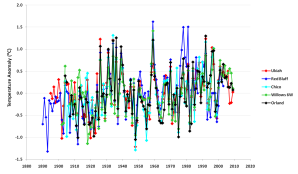 Figure 6. Anomaly plots of GISS adjusted data (Orland data is now in black, which is easier to see)

Going back to Figure 4, USHCN current data is altered from what had been previously captured there (and in Figure 2) – the initial RAW Mean Temperature for Orland is 17.4°C (1904); the Adjusted Mean in 1904 is 16.8°C, but the Adjusted data goes back to 1895 which is now reported as 16.3°C. I can only presume this is using infill from other stations. Perhaps I need to do a bit more reading on this.

In the meantime, here’s why I have a problem with the way the data for Orland and nearby stations is now reported. If a single station shows a response for several years that is not reflected in nearby stations this can be symptomatic of some alteration of the station location, equipment or surroundings; that, I agree should, be adjusted. But when there is a very similar response in nearby stations, that tends to suggest short-term or relatively rapid alteration in the local climate (or weather).  Orland’s location history (see first few comments) seems unaltered; Chico and Willows 6W show reasonable agreement with these warmer temperatures prior to 1903.  Oroville also shows a similar pattern and this is kept by GISS, even after adjustment (Figure 7), although there is a ~0.5°C reduction in the oldest temperatures due to the adjustment. 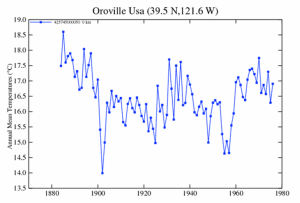 If station and instrument are stable, what is the justification for hiding the decline? I can only think that land use change in early settlement and commencement of agriculture in the Central Valley might explain the temperature drop, but would this account for ~2°C drop in ~25 years at Orland, Chico, Oroville and Willows?  I have found some papers related to this and will update when I have the time to read them properly.

First I have plotted the Raw, TOBS and Adjusted USHCN data with GHCNV2 data for Orland: 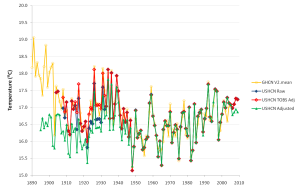 Secondly I can’t find any flaw in my file comparing GIStemp and USHCN so here is the graph: 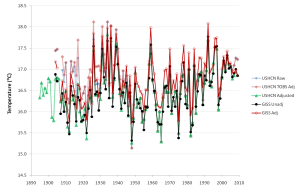 Figure 9. Overlay of GISS Unadjusted and Adjusted data on USHCN data for Orland.

If you look closely, the GISS data (from here) is not an exact match to any of the stages of USHCN adjustment (from here) . This is was a surprise, but see Figure 10.

Also from David Jones in comments, if the early data for Orland is estimated – would that not have been valuable to know before now? What other early data is estimated?

Davidd Jones also pointed out that the likely reason I did not get a match between the two data sets was because the USHCN annual mean was is calculated with January-December annual data, whereas I had used the same method as GISS of first calculating seasons DJF, MAM, JJA, SON, then deriving a Dec-Nov annual mean. He was correct (Figure 10). Minor differences that remain are likely to be because of (my) lack of attention to detail in handling years with missing months (1907, 1995). 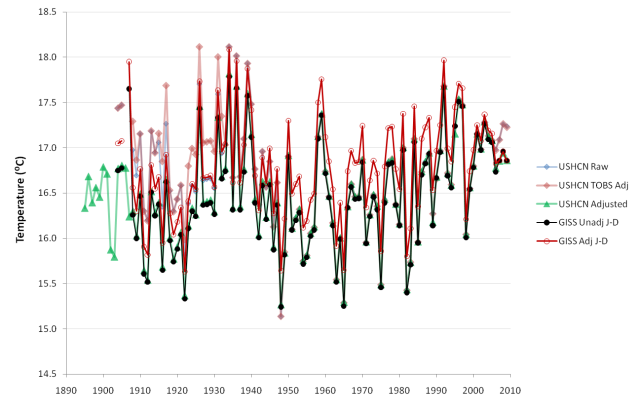 This is a confirmation, if anyone needed it, that GISS unadjusted data is the same as USHCN Adjusted data.

19 Responses to Hide the Decline – Data at Orland is Chopped