With the message “The Arctic region continues to heat up” the Arctic Report Card: Update for 2010 was released by NOAA a few days ago. The NOAA home page has the headline: “Return to previous Arctic conditions is unlikely”.

The sections most relevant to the Arctic (strictly the Arctic Ocean) – Atmosphere, Ice-cover, and the Ocean itself are covered in p.6-26 however since the first report of its kind in 2006, the remit has become broader and now includes sections on Land (p.27-52), Greenland, and Biology (p.53-100), including Arctic Char, Goose Population, and Arctic Wildlife.

“The Arctic Report Card is a timely source for clear, reliable and concise environmental information on the state of the Arctic, relative to historical time series records”, proclaims  NOAA (HERE), but the Report is of little help in this respect. Although the Arctic is an ocean, and the report has a section on Land, the section Atmosphere begins with the sentence: “The annual mean air temperature for 2009 over Arctic land areas was cooler than in recent years, although the average temperature for the last decade remained the warmest in the record beginning in 1900”.  This is illustrated by Fig.A1 (mean 1961-90, CRUTEM 3v) that includes the North Atlantic from Latitude 60°N to 64°N, and the sea area from southern Greenland to Norway. Is that a “trick”? Comparing Figure 2 for the region north of 64°N it seems we are no warmer now (+1.5⁰C anomaly) than around 1938/39.

Figure A.1. Arctic-wide annual average surface air temperature anomalies relative to the 1961–90 mean, based on land stations north of 60°N from the CRUTEM 3v dataset, available online at http://www.cru.uea.ac.uk/cru/ data/temperature/. Note this curve does not include marine observations.

Instead the Arctic Ocean temperature situation is presented by Figure (A3) , which indicates merely an increase in annual temperature anomaly in 2009 for about one-third of the ocean space in the Canadian Basin. A separate analysis for winter and summer would be needed anyhow, and this report could have covered Nov.2009 to April 2010 already at least (see Fig.3) . Instead they talk globally: 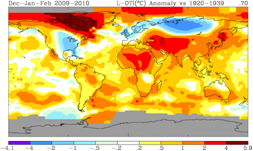 “The first 7 months of 2010 achieved a record high level of global mean air temperature, but this could moderate for the rest of the year due to La Niña influences. The warmest temperature anomalies for the Arctic in the first half of 2010 were over north-eastern Canada”, which may be relevant for January to June temperature in NE Canada, but is of little concern to the Arctic Ocean.

However the report does describe an interesting phenomenon, described here in direct quotes:

Three times “in the last 160 years”! – yet the years are not mentioned, nor any historical context.   Instead the section ends with the conclusion that:

“Models suggest that loss of sea ice in fall favors higher geopotential heights over the Arctic.  With future loss of sea ice, such conditions as Winter 2009-2010 could happen more often.  Thus we have a potential climate change paradox.  Rather than a general warming everywhere, the loss of sea ice and a warmer Arctic can increase the impact of the Arctic on lower latitudes, bringing colder weather to southern locations.”

In the ocean section, the authors tend to focus on 2007 to 2009, not even mentioning the winter 2009/10, or any period or month in 2010.  They report that summer sea surface temperatures fell over the period, and also discuss wind driven circulation and salinity.  Astonishingly, this section (a two page long text of about 1300 words) required 15 authors from 8 institutions and 5 nations for its preparation.

The one text-page long section on sea ice cover starts with the remarkable sentence: “Sea ice extent is the primary parameter for summarizing the state of the Arctic sea ice cover.”, and regards as “Highlights” of 2010:

The main discussion is about the difference between 2007 and 2010, culminating in the information that:

A post by one of the four authors, Dr. Walt Meier, at WUWT (21. Oct.): “Summer 2010 in the Arctic and other Sea Ice topics”, was more informative, i.e. mentioning the importance of bottom and lateral melt, which depends on the ocean temperatures.

The report has some value, at least with a basic analysis and explanation concerning the phenomenal change of wind direction during winter 2009/2010. While it may be risky to guess about three events, I can bet on one without any hesitation, namely winter 1939/40, the first World War II winter, which has been a subject of considerable research for some time (http://climate-ocean.com/)  (See Fig.5 (left)). At the end of the 1930s the NH temperature had been very high, but suddenly Europe was confronted with the coldest winter since the Little Ice Age. This included an interesting change in wind direction, for example in Great Britain (see Fig.4) during the winter seasons 1814, 1841, and 1939/40. One of the leading German meteorologists at the time, R. Scherhag explained the sudden change few years later:

“The temperature anomalies which were observed in the northern hemisphere in January 1940 can easily be explained by the occurrence of the pressure deviations.” (Richard Scherhag, 1951, “Die große Zirkulationsstörung im Jahr 1940”; Annalen der Meteorologie, Vol. 7-9, pp. 327-328). In the same way he tried to explain the Arctic warming (1919 to 1939) In the 1930s. C.E.P. Brooks (1938) felt it necessary to provide a reason: “Attributing the recent period of warm winters to an increase in the strength of the atmospheric circulation only pushes the problem one stage further back, for we should still have to account for the change of circulation.” (in: “The Warming Arctic”, The Meteorological Magazine, 1938, p.29-32.).  And the answer regarding the change in circulation?  It is the ocean that matters.

So here we are, 70 years later. NOAA presents a report with a fanfare, but there are few new facts, meagre explanations and claims that scare. No wonder – if we cannot explain the early Arctic warming since 1919, and the onset of the global cooling since Winter 1939/40, we are unlikely to explain convincingly the mechanisms that drive the conditions in the polar region today. The oceans should be the prime factor; instead the NOAA Report puts the atmosphere and sea ice cover first.

The various essays shall cite the mentioned authors (In total about 69)
http://www.arctic.noaa.gov/reportcard/ (in PDF: 7.5 MB)

NOTE: The Table of Contents is only available by titles, subtitle, pages and other info added.