The posting “Mapping global warming” (Jan. 18, 2010 by “KevinUK”) demonstrated convincingly that “much of the claimed global warming is hardly global at all. In fact it looks to be more accurately Northern Hemisphere warming, and for that matter primarily Northern Hemisphere WINTER warming!”. With interesting access to data and maps it is an enjoyable read, confirming that since 1880 there had been four distinct warming/cooling time periods i.e. from 1880 to 1909 (cold), 1910 to 1939 (warm)[1], 1940 to 1969 (cold) and 1970 to 2010 (warm).  From the dates given, I would like to object the date 1909/10, which should not be considered as the change from a cold to a warm period, as this happened some years later towards the end of the decade beginning in 1910, between 1916 to 1920, presumably in winter 1918/19.  Figure 1 reflects the situation from 1921 to 1930 (Details in the figures in the annex).  Does it matter if we are precise in this respect? The answer is clearly yes.  The more precisely a shift from a warm to cold period, and the region where it occurred is identified, the more it might be possible to identify the cause.  For this reason the following discussion is about the start of the first pronounced warming period after the end of the Little Ice Age, which actually commenced as an Arctic warming, primarily close to the Fram Strait region.

A substantial point observed by ‘KevinUK’, as already mentioned, is the more pronounced warming of the Northern Hemisphere and primarily during the winter season. That is exactly  what the warming period in the early 20th Century is primarily about. While the summer temperatures increased only modestly, the winters generated the steep warming as observed at Spitsbergen (Fig.2), which is also well reflected in the annual data set for north of latitude 70°N (Fig. 3 & 4). The decade from 1921 to 1930 showed a remarkable winter warming (Fig. 5 & 6), which lasted until 1940 (Fig. 3 & 4). This fact is a paramount aspect to identify the reason for this significant shift during the winter period the influence of the sun is remote north of 50°N (i.e. London, Vancouver), but any warming must have been coming from somewhere. 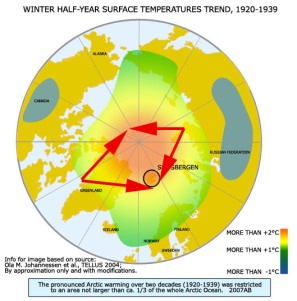 Figures 1, 5 & 6, give a clear indication that the previous warming period in the 1920s and 1930s was primarily located in the North Atlantic section of the Arctic Ocean.  Figure 2, 3 & 4 demonstrate equally that the temperature rise commenced before 1920 (Fig. 5 & 6), probably in 1918 (Fig. 2).  This date (1918) should be regarded as the time the Arctic suddenly moved into a strong warming period.  Actually, the warming started in the Spitsbergen region in winter 1918/19 (Fig 7, Spitsbergen D/J/F), and was only subsequently observed beyond this station. Under these circumstances it seems difficult to regard the year 1910 as starting point. With some generalisation there had been a modest temperature increase before 1910 (Fig. 4), with a significant decrease from 1910 to 1917. At Spitsbergen the shift between DJF-1912/18 and DJF-1919/23 is about 8°C, for the whole Arctic region the increase between the decades before and after 1919 (Fig.3 & 4) is about 2°C.

Having established the time and region of the sudden temperature shift close to Spitsbergen and narrowed it to the winter of 1918/19, it is time to ask, what caused and sustained the warming for two decades. For example ‘KevinUK’ states in the analysis of his Figure 8 that:  “This is demonstrates clear and significant natural climatic variability during this time period in different parts of the world”, and is reasoning in one comment that: “I’ve personally far happy to convinced that these observable difference in differential warming/cooling trend could be caused by differences in water vapour concentration/relative cloud cover, particularly late evening/night-time cloud cover.” The cause is presumably another one.

The Arctic Ocean winter weather is dominated by a sunless period over more than 6 months, full sea ice cover, extreme cold, low humidity, low cloudiness, and anticyclones. Neither sun spots, nor carbon dioxide, nor water vapor can be considered as a significant direct contributor to generate a sudden remarkable shift and keep it sustained over two decades.  As there is no indication that this warming was generated elsewhere, and subsequently moved to the polar region (Fig. 1, 5 & 6), it must have been a local source, namely warm high saline Atlantic water carried by the West Spitsbergen Current to the Arctic Ocean.  Whether this change was due to an increase of the water masses, or due to a change in the structure of the various sea levels over a considerable depth around the gate to the Arctic Ocean, the Fram Strait, is not known. It seems that the latter is the more likely reason. (More details in Book-Chapter 7)

Little is known about an extraordinary North Atlantic sea ice season in 1917. To my knowledge, such a long and extensive sea ice cover occurred only once throughout the 20th Century. Usually there remains a sea ice-free tongue off the shore of Spitsbergen (Fig. 9). Against all rules, the tongue disappeared in April 1917, the sea ice extended far to the South (Fig.10), remained very high throughout June (Fig.11), and only retreated in July 1917 (Fig. 12). About the consequences one can only speculate, but it was certainly not without any.

Throughout the long freezing process the ice-covered sea surface level must release salt, which makes the sea water heavy, and thus increases the vertical water exchange with deeper levels. During the subsequent melting process through July 1917 the sea surface  would have received a huge amount of fresh water; this stays at the surface level, until the salinity and/or water temperature is back to the normal.  This highly unusual event in the Northern North Atlantic from April to July 1917 could well have contributed to a shift in the ocean structure between Spitsbergen and the Fram Strait, which subsequently caused the warming of the Northern Hemisphere from winter 1918/19 to 1940.

Causation III: The change in the northern NA ocean structure.

This is worth further discussion at another time – for now only I will make this  comment. As there was nothing in “the air” (for example a volcanic eruption, a major earthquake, a tsunami, a meteorite plunging on land or into the sea), perhaps we should recall what happened in Europe from 1914 to November 1918. Over four years a devastating battle on land, in the air and at sea took place. Huge naval forces battled in the waters in the east and west of Great Britain, it is my view that this may have  changed the sea structure with respect to heat and salinity over many meters depth. All this water moved north with the Norwegian Current, and the West Spitsbergen Current, to enter the Arctic Ocean after a time period of several weeks or months (Fig. 8). This could have influenced the exceptional sea ice conditions during summer 1917, or even may have contributed alone, via a change in the ocean structure between Spitsbergen and Greenland, the climatic shift in the high north in winter 1918/19.  (More details in Book-Chapter 8 )