BBC news is reporting today that 40,000 homes are still without water in Northern Ireland after the recent spell of freezing temperatures. Many have been without water for more than 10 days, and reservoirs are being drained due to an unprecedented number of leaks since the thaw. Calls to a few friends confirmed that, yes, it is bad – friends in Lisburn have been without water since Christmas Eve due to a frozen mains supply (i.e. not in their house); others in Belfast report low water pressure.  Water is being rationed in places.

Was it really that cold? A search of the BBC site revealed “‘Baltic’ Northern Ireland” tucked away on the BBC NI news page. Castlederg in the West of the province recorded -18°C on 20th December – a new record.  The thing about Ireland is that it sits on the very western fringes of Europe, bathed by the warm Gulf Stream (which is why Doug Keenan considered the 7000 years of Irish tree ring data so important that he pursued Queen’s University through FOI requests).  Ireland, despite its latitude, just doesn’t do ‘very cold’ (or ‘very hot’ for that matter).

When I first got interested in climate I ended up corresponding with Tonyb about the temperature records of the Armagh Observatory in Northern Ireland.  These stretch back to 1796. Incidentally there are a couple of WUWT posts featuring Armagh in the last year (here, here and here). How does this current cold month compare with the historical record at Armagh?  Was the recent cold unprecedented?

The currently incomplete December record for Armagh consists of raw data – three automated readings per hour.  Rather than waiting until they calculate the December average I looked for nearby stations on Weather Underground and found Glenanne PWS, about 15km to the SW of Armagh.  The average temperatures for the two stations over the month of November is plotted in Figure 1.  This gave a good linear fit (R^2 = 0.889) with an offset – Armagh being on average colder by just over 1°C. 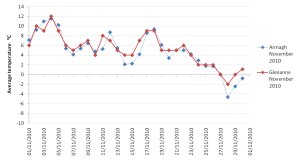 Figure 2 shows the December data for Glenanne on the same scale. Up to the 28th December, the monthly average is -0.86°C.  Mild conditions are expected for the next three days and, if I plug the forecast max/min (29th 8/6; 30th 8/4; 31st 6/2)  into my spreadsheet to complete the month, the monthly average rises to an estimated -0.23°C for Glenanne, remembering that this is an approximation for Armagh, which is typically colder. [Update Armagh now added 19th Jan].

Figure 2. Average temperatures for Glenanne N. Ireland through December 2010 - now up updated to include Armagh data.

Coldest months according to the Armagh record:

The list above also puts it in perspective with respect to other extreme years in living memory – most notably 1963 and 1947. According to the Armagh records none of the coldest months in these years saw such extreme cold as the Christmas period this year.  The Arctic cold cut though the mild Atlantic air this year resulting in a monthly average 4-5°C below normal (Figure 3).

Even without all the warming we have been led to expect 😉 December’s cold probably can be described as unprecedented. I’ll await with interest the actual December figures for Armagh (and those from the Met Office).  As for this being caused by global warming – bull – it was just an extreme weather event.  They happen.  Go back >100 years and they happened then too.

This entry was posted in News, Weather. Bookmark the permalink.