After correct analysis ahead of concrete news from Japan on Saturday, more analysis from ex-nuclear physicist Kevin today.  While the media is speculating like crazy and ‘official sources’ are playing down the risks, to a former AGR designer, it looks serious. 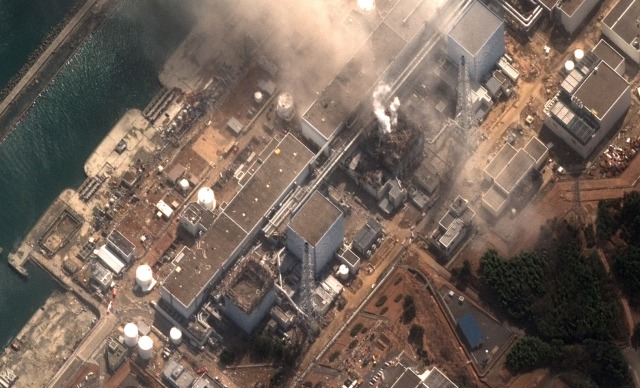 Firstly what really happened at Reactor 1?

There is too much speculation with regard to the state of the reactor core. The bottom line is the hydrogen must have come from somewhere and dissociation of the coolant is the obvious source. I think there has been a partial core melt with the production of some hydrogen from an interaction between the very hot (superheated) steam and the cladding and /or other steel component parts of the reactor vessel. I find it laughable when some of the LWR people posting refer to PWRs and BWRs being inherently safe because if the coolant boils away you can’t get a re-critically of the core. Maybe, maybe not, but I’m sorry what you have got is a core meltdown in this case.

This is because the power density of LWRs is much higher than say UK advanced gas-cooled reactors. High temperature steam and hot steel is not a good mix. CO2 and stainless steel as we have in UK AGRs is much more less chemically reactive. I’d never have the hubris to try to claim that because of this relative chemical inertness AGRs are ‘inherently safe’. If you lose all the CO2 coolant because of the containment depressurising then you will have a meltdown of some degree. I don’t think I’ve ever recounted my story of an experiment not dissimilar to what happened at Chernobyl – ah well sometime.”

And now the Reactor 3 explosion

There are reports coming out following the Reactor 3 explosion that we now have fuel melt in all 3 reactors at Fukushima. I get no pleasure whatsoever from turning out to be correct in my guess as to what was likely to be happening on Saturday morning. 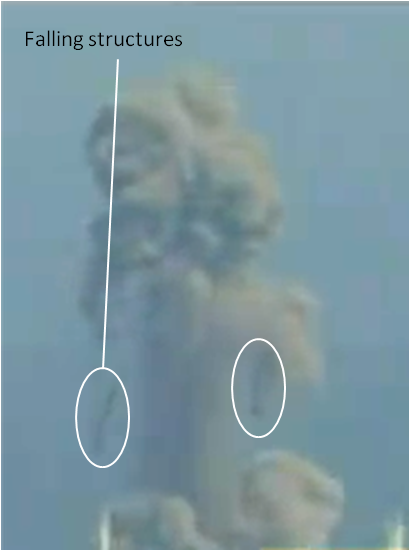 The Reactor 3 explosion was much larger than the Reactor 1 explosion and this looks to be much more extensive damage to the R3 recator building, yet hey are claiming no significant radiation leaks and that all 3 reactor vessels are intact.

Close up - as picture above, with notes (credit: DigitalGlobe)

Whereas Reactor 1 has little damage to the bottom half of its reactor building, Reactor 3 is showing extensive damage to the concrete walls, internal and external to the base of the Reactor 3 building.

If you look at that diagram, the toroidal coolant suppression pool system is below ground level but the primary containment with the reactor pressure vessel is inside it above ground and the footage is showing definite and extensive damage to that part of the building. I’m sorry but there must be damage to the penetrations (inlet and outlet pipes) to the reactor pressure vessel.

I know I’m speculating quite a bit but I’m just looking for evidence that the floor above – the roof above the primary containment and floor of the reactor hall above it have been blown up. And what has happened to that ‘refuelling bridge’ as its called?

This structural damage is purely cosmetic, and the radioactive material released into the atmosphere poses a negligible threat to the population.

Well does the damage to R3 look cosmetic to you?

And the continuing concern over Reactor 2?

According to some reports Reactor 2’s core has twice been completely uncovered. If so then that could result in a complete fuel meltdown, and the control rods are inserted from the bottom of this type of reactor.  Earlier today they were talking open breaking into the R2 reactor roof to relieve pressure and prevent possible hydrogen build up so maybe it just hasn’t built up as much as it did for R1 and R3.  But I’d expect to have seem some steam coming out of the R2 reactor building roof if that had happened.

Earlier NHK-World-TV interviewed the designer of the Fukushima plants; he seemed to think the reactor vessel has a leak, which was reducing levels in the reactor.

According to The Guardian this evening, Reactors 1 & 3 are relatively stable for now, however Reactor 2, which had been using an emergency pump to keep the reactor cool was still of concern:

Speaking about the situation at Reactor 2, the government’s chief cabinet secretary Yukio Edano said: “The pump ran out of fuel, and the process of inserting water took longer than expected, so the fuel rods were exposed from the water for a while.”

The decision to pump salty, untreated seawater into the nuclear reactors – along with boric acid to dampen down radioactivity – is a vastly expensive last resort that effectively writes off the reactors. The plants are usually cooled by highly purified deionised water that does not damage the delicate components inside.

Engineers at the power plant face a difficult balancing act because the seawater being pumped into the reactors immediately boils and the steam is raising the pressure inside. This has to be vented before more water can be pumped in, but this releases small amounts of radioactive material into the air.

Update: from The Telegraph:

“There was a huge explosion” between 6:00 am (2100 GMT Monday) and 6:15 am at the number-two reactor of Fukushima No.1 nuclear power plant, a Tokyo Electric Power Co (TEPCO) spokesman said.

Chief Cabinet Secretary Yukio Edano told reporters the suppression pool of the number-two nuclear reactor appeared to have been damaged.

This is the bottom part of the container, which holds water used to cool it down and control air pressure inside.

This could be much more serious…

This entry was posted in News and tagged Earthquake, Energy, Fukushima, melt, Nuclear. Bookmark the permalink.