This is a video of the anomaly graphs (First Differences method) for all GHCNV3 stations by year generated by Charles Duncan for a previous post. I post them here mostly as a curiosity.

Remember, these are only year-on-year differences for each station, for each year, plotted as a distribution.  As pointed out by Dr Roger Pielke Sr. today at Watts Up With That – Climate Science Myths And Misconceptions – Post #2 On The Metric Of Global Warming – anomalies are

These graphs can’t show the spatial, but they do depict the annual temporal heterogeneity. They also illustrate that there are few years that are ‘average’ – there are large year-to-year differences in the spread of the anomalies. You can see, however, the build up of heat (predominantly warmer anomalies) for example in 1997 and 1998 as El Nino builds.

Averaged, they produce this (a crude version of this now familiar graph):

The differences arise due to lack of spatial weighting etc.

Averaging the distribution across all years results in a near symmetrical distribution centred at zero – in other words, despite large year to year fluctuations, there is little change from 1900.  This is  no surprise; global warming is only 0.74°C. What is most interesting is that small differences do show up if you look at ranges of years:

The “All to 2010” curve is nearly symmetrical; that for 1970-2000 is biased towards positive anomalies – just slightly.  If the data is smoothed and scaled, bias can also be picked up:

To show up the symmetry (or lack of it), a mirror image was created and overlaid the original for each series: 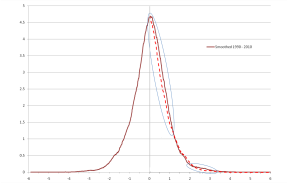 And there you have it – a small, but detectable asymmetry biased towards warm anomalies between 1900 and 1939; no perceptible bias in the period 1940-1989; slightly larger bias during 1990-2010. It is that bias that is picked up as global warming.

It kind of puts it in perspective doesn’t it?