Last week the Guardian published an article reporting from Bolivia on plans to introduce new laws related to protecting nature from human activity.  The piece was about the effects of climate change in Bolivia and cited a large and accelerating temperature rise there as a result of AGW. Really? Time to do some digging.

The article by the Guardian’s John Vidal begins:

Bolivia is set to pass the world’s first laws granting all nature equal rights to humans. The Law of Mother Earth, now agreed by politicians and grassroots social groups, redefines the country’s rich mineral deposits as “blessings” and is expected to lead to radical new conservation and social measures to reduce pollution and control industry.

This is Bolivia setting itself up as a victim of climate change and, as such, at the mercy of Western economies, demanding large cuts in carbon emissions at the UN climate talks.

Bolivians are living with the effects of climate change every day ….

Research by glaciologist Edson Ramirez of San Andres University in the capital city, La Paz, suggests temperatures have been rising steadily for 60 years and started to accelerate in 1979. They are now on course to rise a further 3.5-4C over the next 100 years. This would turn much of Bolivia into a desert.

These issues were also discussed in an accompanying video report. This is a screenshot of the graph shown by Ramirez: 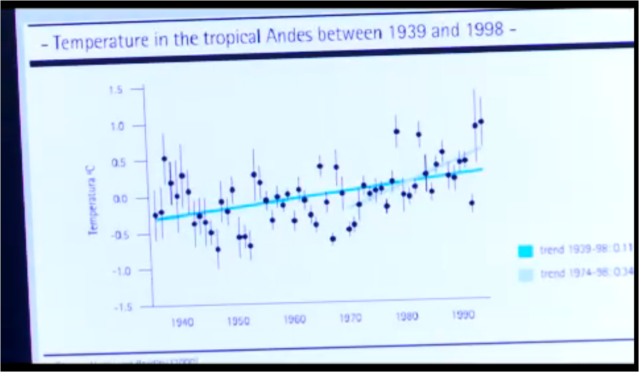 How much of a temperature rise?

Ramirez says 3.4°C per century.  And the graph appears to stop in 1998. Hmm.  One of the issues raised previously for this part of the world was the lack of data reported from Bolivia into the climate data sets, with no stations in GHCN V2.mean and GISTEMP after 1990 (see E.M. Smith’s The Bolivia Effect).

The adjusted data, corrected for instrumental changes and station moves etc. shows the warming he was talking about, and its acceleration after 1979, but he neglects to mention that more recent data shows a drop of around 1.5°C, falling back to the level of 1940-1980.  Oh dear – another case of hiding the decline 😉 But that’s just La Paz/Alto. It is a large city that has been rapidly growing, particularly El Alto, surrounding the airport. In fact from another article by the Guardian’s John Vidal explains the growth of the city that has surrounded the airport and weather station (possibly contributing to the temperature rise):

Poor El Alto is the satellite city of rich La Paz, overlooking the capital of Bolivia from up in the altiplano. In 1952 it was little more than a village; in 1960 it had fewer than 30,000 people; now it has exploded into a metropolis with up to 1 million or more… 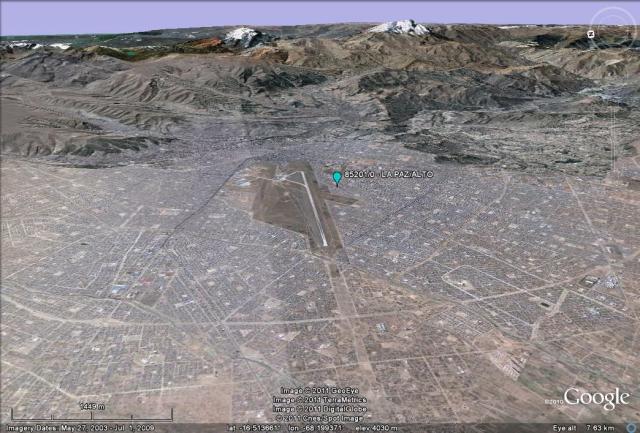 So what of other stations? 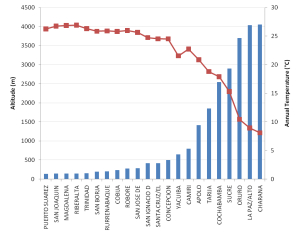 Five stations besides La Paz/Alto are high altitude. The following map shows not only the stations, but also the terrain: 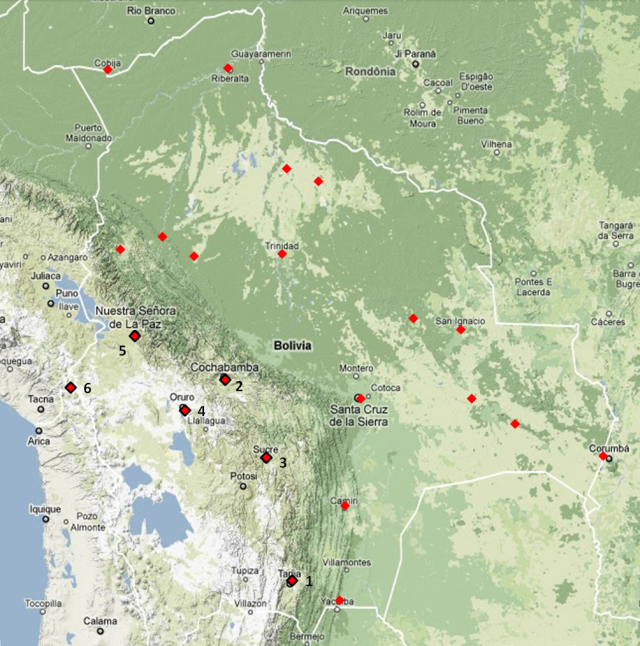 Other than La Paz/Alta, the five high altitude stations where a trend is derived show no sign of catastrophic warming when data after 2000 are taken into account.  In fact it is quite the opposite, and more than that, presenting the data only up to 1998 was a convenient cherrypick. 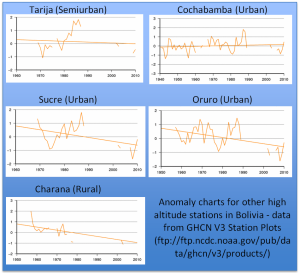 Vidal’s second article does give something away:

Hundreds of thousands of people have flooded in from the countryside to find work and opportunity, but increasingly the reason they give for moving is that frequent droughts, erratic rainfall, heatwaves, unseasonal frosts and floods have made conditions too hard to grow crops. Bolivia has had five major droughts or heatwaves, as well as floods and major mudslides in the past decade. Few people in El Alto could be classed entirely as “climate refugees”, but the changing physical environment is clearly one of the new drivers of people to this burgeoning city.

I have huge sympathies for people in developing nations who rely on subsistance farming and natural supplies of water, and the loss of Andean glaciers is indeed a concern for the region, however, this kind of reporting does no-one any favours.

5 Responses to Cherrypicking in Bolivia