The only way is up

Charles Duncan has sent me a simple analysis comparing the unadjusted and adjusted versions of the data in GHCN V3.

The following graphs were created in an Excel spreadsheet as anomalies for each stations ref 1940 using a First Differences Method.  The annual anomaly for each station is compared and the differences summed without spatial weighting.  Only one distinction is made: that between Rural/Suburban/Urban stations.

Yes that’s right, from 1940, on average adjustments increasingly warm the data. Here are the differences: 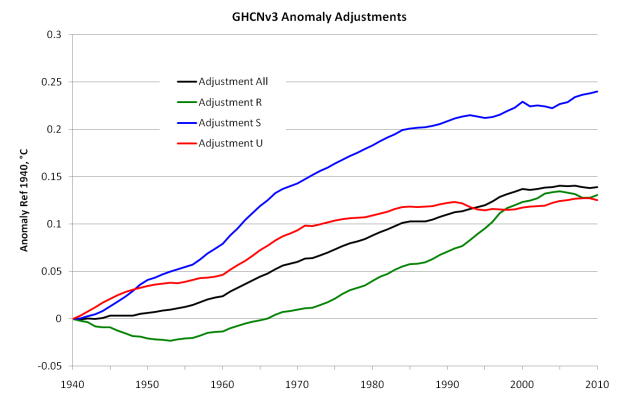 That is a lot of warming, especially in the Suburban stations (although they have little effect overall).  In fact the only cooling adjustment is for rural stations between 1940-1970, and the result of that is to increase the slope of the rural post-1970 graph.

Are you shocked? I was. Without spatial weighting this overall adjustment averages 0.24°C per century (trend of black line above).  Then I remembered I had seen something about this previously – from the slides of the NCDC presentation at the Exeter Workshop in September 2010.

Let me just say I understand the need for adjustments. In the past station data may have been recorded at a different time of day (Tobs – Time of Observation – adjustment); stations move (SHAP – Station History Adjustment Program) and the equipment used changes. Hang on, isn’t there something about ‘adjustments may go down as well as up’?  Oh hang on – that’s ‘investments’ 😉

This data also goes through Quality Assurance and Homogeneity Adjustment, which essentially looks for changes in stations relative to those around them.

In this approach, comparisons are made between numerous combinations of temperature series in a region to identify cases in which there is an abrupt shift in one station series relative to many others. The algorithm starts by forming a large number of pairwise difference series between serial monthly temperature values from a region. Each difference series is then statistically evaluated for abrupt shifts, and the station series responsible for a particular break is identified in an automated and reproducible way. After all of the shifts that are detectable by the algorithm are attributed to the appropriate station within the network, an adjustment is made for each target shift. Adjustments are determined by estimating the magnitude of change in pairwise difference series form between the target series and highly correlated neighboring series that have no apparent shifts at the same time as the target.

You would imagine that step changes dues to site moves or new equipment are easiest to detect, but gradual change due to land use alterations might be harder to pick up.  Growth of urban areas can also be picked up, although I imagine this might also be harder up if gradual change is happening throughout a region. Here’s Slide 15 from Menne’s Exeter presentation: 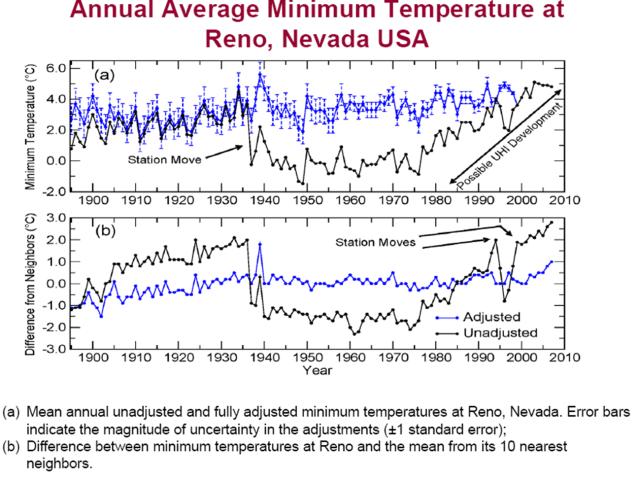 NCDC’s methods seem thorough, so why am I still bothered by the fact that the adjustments seem only to amplify the warming, and by so much?  It’s just that I’ve seen even greater thoroughness, and we should not underestimate the effort it takes to get this right. It is not so much the adjustments – corrections for documented and undocumented station moves – that bother me, as the unknown quantity of unidentified, gradual change that may be spread around by homogenisation.

NCDC’s method was previously used just in the US (for USHCN) and in GHCN V3 is now being applied to the rest of the world.  Yet when these methods are compared to those used by a professional company (WeatherSource) for US data (Utah) further changes and differences are picked up.  As previously featured on Watts up with That here, Mark Gibbas’ report An Investigation of Temperature Trends from weather station observations representing various locations across Utah  is very detailed, picking up differences that both warm and cool that data. The company’s method, as described in the report, is also based on pair-wise adjustments, but uses daily figures and seasonal data, and their ‘clean data’ shows significant shifts compared to USHCN data. In some cases this increases trends, in others it reduces them. Of course knowing about changes that affect the temperature is one thing; being able to correct for them accurately is a whole other kettle of fish.

Perhaps future generations will look back and laugh that we even tried to detect a warming signature in the global surface temperatures against a background of change in measurement environs that were so poorly documented and understood at the time.

7 Responses to The only way is up