A while back I tried to calculate how submarine volcanic activity around the West Antarctic Peninsula might affect water temperatures, and in consequence land temperatures in the region. What I lacked was a credible estimate of the size of a submarine eruption. I mean I could imagine a small eruption, but when you see pictures of discrete pillow lava formation (e.g. left) there is no imagining the scale as in a subaerial eruption.

Images of the sea floor around the Axial Seamount were reported recently with news of the discovery of a large eruption.

“An undersea volcano has erupted off the coast of Oregon, spewing forth a layer of lava more than 12 feet (4 meters) thick in some places…”

“…producing hardened lakes of blobby lava, in places more than a mile (1.6 km) across”

Data from Wolframalpha gives an ocean depth of ~1-1.5 miles for this location (Juan de Fuca Ridge) so I’ve enough to work with at last.

Perhaps a 1m average depth of lava would be more realistic, but this still gives an average temperature increase of 0.71°C – over the area of a square kilometer.  And in real life you could imagine that, with convection, a warm plume of water would develop increasing local temperatures even more and spreading out at the surface. Of course finding such transient ‘hot spots’ on the ocean surface, if they even occur, would be like finding a needle in a haystack. 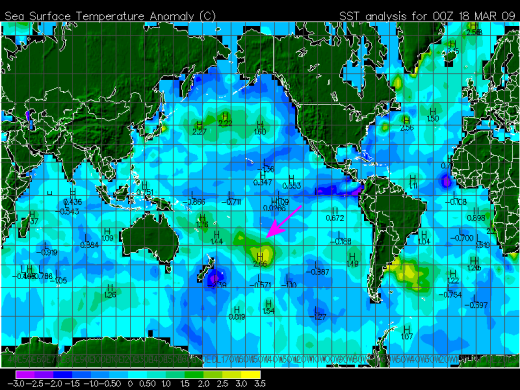 My original curiosity was sparked by  Undersea Volcanic Eruption In Tonga, although the premise that this was causing the SST anomaly shown above was dismissed by many (poor) calculations and by Bob Tisdale here. But on the other hand jorgekafkazar says in comments:

“…released volcanic heat would rise by convection very rapidly, especially as the pressure fells below the critical point. The entire column of water (n km by n km) wouldn’t be heated, just the portion almost straight above the vent all the way to the surface, maybe as small as 100 meters in diameter.”

…then at the surface the warm pool would spread. 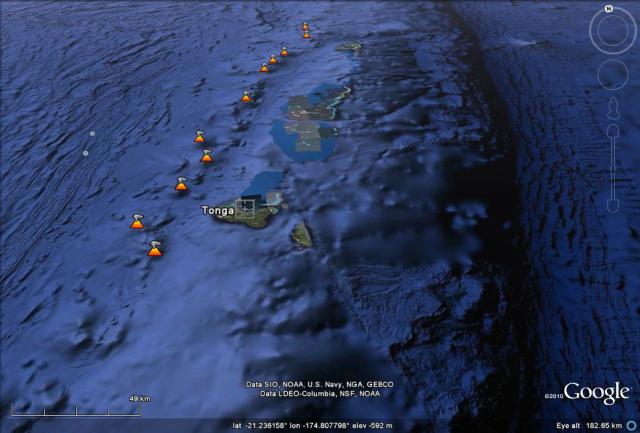 The volcanic area west of Tonga

Ocean depth in this area (right) is up to 1.5 km, not the 6000+km of the Tonga trench, so the calculations above apply, except that we don’t know the magnitude of the eruption or the exact depth of the vent (more about that in a moment).  So, while I defer to Bob Tisdale’s conclusions that the SST anomaly (area ~500 x 500km) is complex “weather noise”, volcanic heat can make a significant localised contribution.

In case you were wondering, like me, why most submarine eruptions seem to be depicted as pillow lava, yet explosive eruptions can and do break the surface, ocean depth is one of the factors.  When Sohn et al [4] found evidence of pyroclastic deposits associated with volcanic activity in the polar Gakkel Ridge they determined that a high CO2 content in the magma would be sufficient to overcome pressure containment at depth (Table 1).

We calculate the minimum CO2 volume fraction in a volatile-rich layer accumulating under the roof of a crustal magma chamber required for producing pyroclastic activity on the sea floor at a depth of 4,000 m. Magmas with the gas volume fractions shown in column 2 will fragment just before reaching the sea floor, producing very small deposits. However, if the CO2 volume fraction in a volatile-rich layer is ~0.75, fragmentation occurs at the magma chamber depth, and a much more energetic eruption occurs as the gas accelerates during ascent to the sea floor, producing the approximate conditions shown in columns 3–5.

Large-volume pyroclastic deposits have been found in shallow water (500–1,750m water depth) on the Azores Plateau, but the only previous evidence of pyroclastic material at water depths greater than 3,000m (the critical depth for steam) is limited to small fragments recovered in sediment cores. Hydrostatic pressure inhibits volume expansion, and below the steam threshold any explosive activity must result from magmatic volatiles rather than secondary surface effects. CO2 is the most plausible evolved volatile component for MOR basalts, and at 4,000m water depth a CO2 weight fraction of ~14% (ref. 3) [in the paper] is necessary to achieve the volume fraction of ~75% needed to fragment an erupting magma. This value exceeds the maximum dissolved CO2 concentrations measured in a MOR basalt (~1.4 wt% in a ‘popping rock’) by an order of magnitude.

Since I’ve mentioned the Gakkel Ridge, Tom Moriarty of Climate Sanity, in Volcanos in Gakkel Ridge NOT responsible melting the Arctic ice, used the Mt St Helen’s eruption as a starting point.  According to the U.S. Geological Survey Mount St. Helens released 24 megatons of thermal energy, 7 of which was a direct result of the blast. Tom concluded that an equivalent release of energy by the Gakkel Ridge, would melt just 100 sq km of 3m thick ice, or 300 sq km at 1m thick. That is nothing compared to the seasonal ice melt.  My own calculations agree. The Gakkel Ridge is also in very deep water

So, so far it’s not looking likely that volcanic heat has much, if any, effect beyond localised heating of water in the vicinity.

The track of the echo sounder shows the submarine volcano rising from 1000m water depth to a peak with water depth of 250m only. (photo: Gemma Kirkwood - http://www.ldeo.columbia.edu/news/reports/2004/CORC04/05_10_04.htm)

So going back to the West Antarctic Peninsula, for example Scientists Discover Undersea Volcano Off Antarctica, could this have an effect on local sea temperatures? Sea temperature can and does affect coastal land-based temperatures and we know the WAP is warming.

“Highly sensitive temperature probes moving continuously across the bottom of the volcano revealed signs of geothermal heating of seawater. The heating was noticed especially near the edges of the feature where the freshest rock was observed.

These observations, along with historical reports from mariners of discolored water in the vicinity of the submerged peak, indicate that the volcano has been active recently.”

In such shallow water the effects are interesting (from my calculations and estimation of what would happen in water with convection etc.). A small eruption at 250m of say 10 x 10m and 0.5m thick deposit (50m3), would be sufficient to raise the local water temperature in a similar 100 sq m area by more than 2.8°C (uniformly within the 250m water column, which of course would not happen that way).

I wondered how much lava at this depth there would have to be (making the unlikely assumption it was not explosive) to raise the temperature of an area say 10km2 by >2.0°C. The answer?  4 million cubic metres (0.004 km3). To put that in perspective Kilauea typically produces ~ 0.1 km3/year (100,000,000 m3) of basaltic lava. Yes, local effects are possible if ocean depth is relatively shallow.

Global (magma and lava) production rates are estimated at 3km3 per year for mid-ocean ridge systems and 1km3 per year for continental volcanic systems. For global impact, (mid-ocean ridge (MOR) ~80,000km long; average water depth of 2,500m) there’s enough energy in the volume of lava produced by MOR annually to raise the temperature of 8,000 km3 of seawater by just over 0.5°C – that’s a drop in the ocean (1.3 billion cubic kilometres).

This entry was posted in Volcanoes and tagged Heat, Volcanoes, Warming. Bookmark the permalink.