How BEST to deal with cooling cities

I’ve been silent on BEST so far. I still have not read the papers or looked at the data. I’m barely keeping up with so much being written about it.  New posts on station data analyses have been absent for a while too, the main reason being that I don’t have time for the rigour required to check and finish analyses to the standard required for a post. However, I am intimately acquainted with the SHAPE of the station data that makes up the GHCN data sets.

A current post by Anthony Watts – Uh oh: It was the BEST of times, it was the worst of times strikes a chord with what I’ve wondered about in relation to urban temperatures.  This graph is an overlay of a GISS data for Los Angeles and data from BEST, plotted by Steve McIntyre.  Glad to see Steve is on the case, big time it seems (Some BEST Tools and subsequent posts).

So this is a city cooling when we argue about Urban Heat Islands, cities warming faster than the surrounding rural areas, and whether or not there should be compensation for UHI in global temperature calculations.  To quote Steve McIntyre:

“The degree to which increased UHI has contributed to observed trends has been a longstanding dispute. UHI is an effect that can be observed by a high school student. As originally formulated by Oke, UHI was postulated to be more or less a function of log(population) and to affect villages and towns as well as large cities. Given the location of a large proportion of stations in urban/town settings, Hansen, for example, has taken the position that an adjustment for UHI was necessary while Jones has argued that it isn’t.”

What I want to know is, if GISS does adjust for UHI and CRU doesn’t, how come the graphs produced by each are almost identical in the rate and extent warming shown? This is cited by Steven Mosher, Zeke and others in area weighted replications of Rural vs Urban data and Unadjusted vs Adjusted that the adjustments make little difference because the warming is ubiquitous (See Climate Parallax for example), and I will be, at best, called naive for still thinking they do.

Let me go on record now in saying that nothing I have seen inside the data sets derived from GHCN convinces me that the warming we are being told is happening is in any way catastrophic.  In fact, for the most part, changes in temperature of the stations and their surrounding areas and ‘nearby’ stations (in some cases >1000km away), can be related to urban change, land use change, or badly accounted for station moves (which one hopes will be corrected for). The problem is, at the moment, there is too little attention paid to this due to the enormity of the task, our lack of agreement in how to do this accurately (if we can), and people saying it doesn’t matter and won’t make any difference.

Actually the cooling shown by Los Angeles doesn’t surprise me (see In search of Cooling Trends (many of the stations were cities), and Cherrypicking in Bolivia).  I’ve come across this before and I can see a mechanism for how it might occur that some cities cool while others are warming more than their surroundings.

While the current furore is mostly about the last decade, I also have my eye on a similar effect in the middle of the century. Take Oslo, capital of Norway for example: 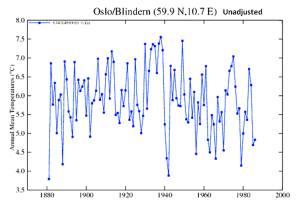 There is strong cooling from the 1940s, despite continued population growth of the city.  How could this be?  The Blindern site is located at University of Oslo, and has a known, well documented history going back to the early 1800s in the middle of the city at the top of Oslo Fjord. It is a compact city, bounded by the sea and surrounding mountains; it has grown by spreading, fingerlike, up valleys and down the shores of the broad fjord.

Oslo Blindern might be an example where city growth and UHI developed early in its history, then stayed relatively static. Due to its latitude, the need for good insulation and lack of need for air conditioning would not have seen significant additional ‘heat dumping’ into the city due to technological growth in the post-war period.  Perhaps this is a truer estimate of temperature in the latter half of the century than at some nearby warming stations, but I am only speculating.

Homogenisation with surrounding stations, which are generally warming, reduces the cooling but it is still there:

In fact homognenisation by GIStemp does this to a lot of cooling stations, when the surrounding stations may in fact be warming due to early stage UHI and/or land use change.  BEST also homogenises and Doug Keenan suggests this effect too in his correspondence with Richard Muller:

“Considering the second paper, on Urban Heat Islands, the conclusion there is that there has been some urban cooling. That conclusion contradicts over a century of research as well as common experience. It is almost certainly incorrect. And if such an unexpected conclusion is correct, then every feasible effort should be made to show the reader that it must be correct.

I suggest an alternative explanation. First note that the stations that your analysis describes as “very rural” are in fact simply “places that are not dominated by the built environment”. In other words, there might well be, and probably is, substantial urbanization at those stations. Second, note that Roy Spencer has presented evidence that the effects of urbanization on temperature grow logarithmically with population size. The Global Average Urban Heat Island Effect in 2000 Estimated from Station Temperatures and Population Density Data

Put simply, homogenisation ‘averages’ the trends; the data is ‘messy’ and homogenisation is meant to ‘tidy up the mess’ (for an expert view start here), but in doing so there is some decision as to which sites are adjusted and by how much.   Without looking at stations subjectively to ascertain if anything that changes with time (other than CO2/climate change) could be affecting temperature (quality is everything), putting them in categories – urban, rural, very rural – and treating them objectively (as science dictates – see objectivity) is useless.

Why I think this is important.

Dr Judith Curry had an interesting point in her presentation to MIT Climate Science and the Uncertainty Monster:

At the time I was interested in differences between the NH and SH, but just look at the rate of cooling between 1940 and 1970. It’s very small, but then this is land and sea surface data.  Here is the GISS data for meteorological stations (land) only:

An estimate by eye of the cooling gives approx. -0.6°C/century cooling trend between 1940 and ~1970.  And I’ll say again – if GISS does adjust for UHI and CRU doesn’t, how come the graphs produced by each are almost identical in the rate and extent warming shown – and the small degree of mid-century cooling?  With more data and different homogenisation, I note the BEST graphs are close also.

When you look at the actual data stations with a cooling trend in this time period seem to outnumber those with a warming trend. You can see this below on a map from Kevin’s January 2010 post Mapping Global Warming. (The key to the colours is here – note the palest blue is cooling of 0.0 to -1.0°C/century and the darkest is -4.0 to -5.0°C/century):

Adjustment/homogenisation produces more orange dots and fewer blue ones. Combining and spatial weighting of the data results in the GISS graph above. This goes back to my point about Oslo Blindern and many other stations, and I infer no malicious intent, but the adjustments do seem to have a cancelling effect.  Perhaps it is unintentional and inadvertent, but is this yet another way to ‘hide the decline’?

I acknowledge it is entirely possible that adjustment and correct UHI correction will make no difference, but I remain to be convinced.

Update – now this graph overlay from Frank Lansner shows a perfect example of why I have such concerns.The original post is here:

12 Responses to How BEST to deal with cooling cities