The title* neatly sums up what the Climategate 2.0 emails reveal about the activities and opinions  of the ‘elite’ of climate science (*thanks to a comment by Anoneumouse of The Anglo Saxon Chronicle – an who has followed it up with the great montage image (left)).

They tinkered with data and paleoclimate proxies…

…tailored the message to what was required by their political masters…

…but most of all it showed them as sly and conniving, plotting and manipulating their field to ensure their own position was unassailable. 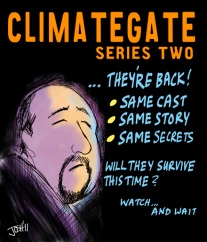 ere’s what I said of the Climategate 1.0 emails two years ago; it still stands:

“…individually the emails are boring, don’t say much and are easy to wave off, but when you read again and again phrases that do not sit well with honesty and scientific integrity it is hard to view this collaborative group in any favourable light.”

Reading the emails this time I get the overwhelming impression of a bunch of grownup schoolboys who relish their position at the top of the game and have let it go to their heads. From bullying to scheming and downright nasty, they most of all show a lack of personal integrity.

“ …I have been having something of a run in with a French scientist called Vincent Courtillot. [ …] If you’re there on the Friday when Vincent is talking then tell him he’s just completely wrong. He will likely say the climate isn’t warming and even if it was it has little to do with greenhouse gases. So shouldn’t be difficult!!

…just make sure one or two reasonable scientists are aware that they have invited a bit of rogue!
Cheers
Phil”

“You’ll get one awful talk on the Friday from a Vincent Courtillot. If he lays into me, or says the world isn’t warming you have my permission to go and put the boot it. Shouldn’t be difficult.
Have emailed Jim as well.
Vincent is a prat, but he’s a well connected prat – French Academy and all that.”

A few people do come out of it well. For example Richard Alley on the issue of divergence between paleoclimate proxy data and the instrumental record:

“I know I’m not in chapter 6, I know I’m not a tree-ring expert, and I know I’m sticking my nose in where it might not belong or be welcome. But the flurry of emails in the last couple of days has not convinced me that this one can be ignored;” (3733.txt)

Having published the Soon and Baliunas paper at which ‘The Team’ took umbrage, Chris de Freitas (of the journal Climate Research) and his boss Otto Kinne, show appropriate assertiveness in the face of the bullying tactics. Even then ‘The Team’ sees no reason to quit:

“It seems clear we have to go above him. I think that the community should, as Mike H has previously suggested in this eventuality, terminate its involvement with this journal at all levels–reviewing, editing, and submitting, and leave it to wither way into oblivion and disrepute,” Michael Mann (0255.txt)

I would point out here too that these are not heat of the moment reactions of wounded kids.  The de Freitas affair runs in the emails from the Team’s discovery of the Soon & Baliunas’ paper (1047390562.txt) in early March 2003. In August , thwarted by Kinne, they are proposing getting together an ethics committee to remove de Freitas.

In the meantime, I urge people to dissociate themselves from Climate
Research. The residual ‘editorial’ (a word I use almost tongue in cheek)
board is looking like a rogues’ gallery of skeptics. Those remaining who
are credible scientists should resign. (3681.txt)

The further list of their machinations and misconduct includes:

Jeff Id has a good selection of quotes in Their Words but one of the best summaries of the week was by Steven Hayward, at The Weekly Standard via the GWPF:

Leading scientists in the inner circle expressed significant doubts and uncertainty about the hockey stick and several other global warming claims about which we are repeatedly told there exists an ironclad consensus among scientists. (Many of the new emails make this point even more powerfully.) On the merits, the 2009 emails showed that the case for certainty about climate change was grossly overstated.

More damning than the substantive disagreement was the attitude the CRU circle displayed toward dissenters, skeptics, and science journals that did not strictly adhere to the party line. Dissenting articles were blocked from publication or review by the Intergovernmental Panel on Climate Change (IPCC), requests for raw data were rebuffed, and Freedom of Information Act requests were stonewalled. National science panels were stacked, and qualified dissenters such as NASA prize-winner John Christy were tolerated as “token skeptics.” The CRU circle was in high dudgeon over the small handful of skeptics who insisted on looking over their shoulder, revealing the climate science community to be thin-skinned and in-secure about its enterprise​—​a sign that something is likely amiss.
Do read the rest here.

This entry was posted in Climategate and tagged CRU. Bookmark the permalink.