Roy Spencer’s recent work (here and here) and comments by Peter Azlac got me thinking about urban heat islands (UHI) again.  I’ve been musing that so many studies show, measure or quantify UHI in various places, and the likes of Jim Goodridge and Roy Spencer can demonstrate correlation of various measures of urban and human influence vs temperature in (albeit imperfect) studies, while lukewarmers Steven Mosher and Zeke over at Lucia’s cannot? My own personal view is that rural land change and UHI are so indelibly written into the temperature record that we’ll never be sure of deciphering an effect; of course that does not mean we shouldn’t try.

Few people deny that UHI as a phenomenon exists (or at least can exist under the right conditions).  The argument is whether it has any significant impact on the global mean surface temperature.  Skeptics like to point out, as Paul Homewood says here, that warming and cooling trended stations co-exist and that there is an apparent large divergence in the response of stations over a measured period that points to UHI. However, as Steven Mosher puts it:

It is well known that you can look through the data and stations and find “cases” where an urban station looks to have UHI. Doing this is easy. Pick the biggest cities you can. But,  that doesnt get you an answer to the question: “what is the bias in the total record?”  If you like remove those few bad apples and the answer you are left with is indistinguishable from the answer you get with those bad apples left in the record.

Mosh’s approach has tended to use the ‘gold standard’ stations with longer records of 70 years or more, but even some shorter scale studies find no difference overall. Why?

It is not just the ‘bad apples’ that are warming, and not just because of CO2 or global warming (as if!). Changes in land use are starting to gain acceptance as affecting data. The challenge is understanding and proving the effects of human-induced changes and separating them from natural warming and any from CO2. No mean feat.

In The First Measured Century a narrative describes the pace of change in the USA:

At the beginning of the century, 60 percent of the population lived in or around places with fewer than 2,500 inhabitants.

The decades before and after 1900 were a period of enormous transformation in the physical locations of Americans. Demographers typically distinguish two modes of living: urban and rural. In plainer language, people live in the city or they live in the country. Throughout the nineteenth century, the United States had been mostly a nation of farmers, who lived in the country. Indeed, immigrants came to America seeking land that they could farm.

But throughout the nineteenth century, the population living in cities rose faster than the rural population. As the 1800s wore on, more and more Americans moved from the farm to the city, abandoning farming to build new industries in the cities.

In 1880, when a new wave of immigrants began to arrive in the United States, they moved to American cities, not to the countryside as immigrants had for 250 years. Immigrants took jobs in the new industries in the new cities. […] The cities grew at a fabulous pace, some of them doubling in size every decade. By the 1920 census, the urban and rural populations were equal in size, but the rural share would continue to drop for the rest of the twentieth century. […]

The growth of the nation’s suburbs, in contrast, continued throughout the century.

The share of the U.S. population that lived in the suburbs doubled from 1900 to 1950 and doubled again from 1950 to 2000. Frequently, the suburbs of one city expanded until they encountered the suburbs of another, creating urban corridors such as those that connect Chicago and Milwaukee or San Jose and San Francisco. Some of these corridors combined to create even larger configurations. At the end of the century, an urban corridor extended more than 700 miles from Norfolk, Virginia, to Portland, Maine.

In other parts of the world urbanisation is now taking off rapidly. While developed nations have more than 80% of their populations in urban areas, the developing world with 30%, 40%, 50% currently is catching up.  Can attempts to model city growth help?

According to Bettancourt and West (2010) the growth of cities, just like biological growth, displays common characteristics that allow mathematical description.  West also describes their work in a TED video here. Basically city growth is sigmoidal, reaching a stable size at maturity.  Interestingly though, infrastructure growth is also sub-linear (log vs log):

“…doubling the population of any city requires only about an 85% increase in infrastructure, whether that be total road surface, length of electrical cables, water pipes or number of petrol stations.”

This says that population growth is only partially a measure of urban growth.  Yeah, no surprise really.  So we can summarise and generalise about the growth of cities “on average”, but do real cities, over the timescales were dealing with really grow constantly? Actually even looking at the population growth of a few cities suggests not: 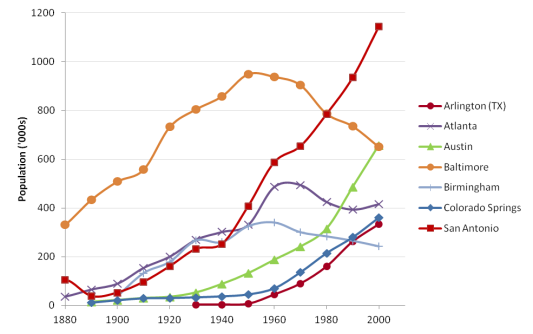 Data from US Bureau of Census

OK these were chosen because they showed differences. However, in looking at warming, we’re trying to lump weather station sites into one of three categories: rural/suburban/urban and it is no surprise that sometimes the differences between two stations in the same category are greater than the similarities.  If we look at some of those cities in terms of growth rate, a couple of things show up… 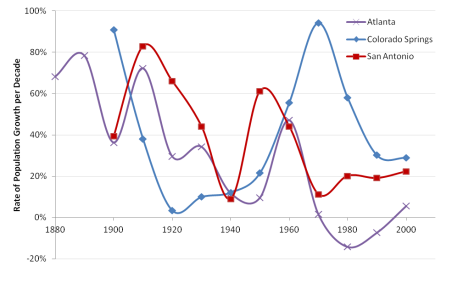 … rapid growth of young towns and cities, declining after 1910 and WWI, the slump of the Great Depression in the 1930s followed by WWII, the post war recovery and baby boom.  These show up too in house-building across the nation and the housing boom in the 1950s is interesting for many reasons, some of which will have to wait for Part 2.

We can see that the growth of cities is erratic and variable in time, both in terms of house building and other infrastructure.  It is also spatially variable.  Basically cities and towns, even ones of the same size, cannot necessarily be treated the same across long timescales. It we imagine a single geographical area, perhaps a grid square, which has three urban sites of various sizes and we were able to measure the growth of UHI, it might look something like this:

At Site 1 either there is little change up to 1910 or it does not cause warming; after that a sharp increase stopped by the Great Depression after which a slow increase again.  Site 2 shows no changes until after 1960, while Site 3 undergoes huge change in the initial years. Each has its own story.  In this hypothetical case, note that the average of the warming at these three sites is actually not so different from the global average.

Imagine that these sites co-exist in a grid square with a rural site of which the record looks something like this: 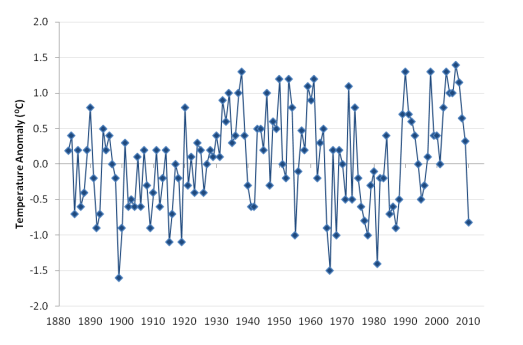 There is actually a 0.34°C/century trend over this record.  Add the three sites and the average for the  grid square without adjustment is increased to 0.7°C/century. 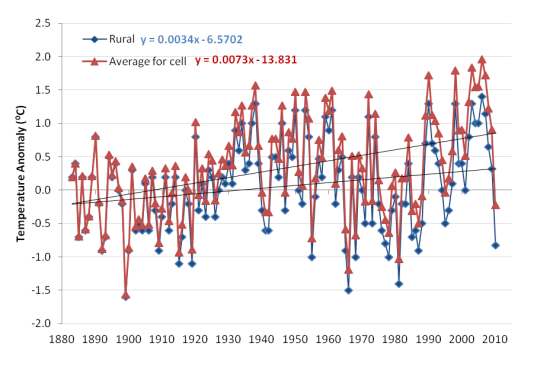 Detecting and removing UHI from station data is complex and is done by comparison with other sites.  The NCDC/NOAA documentation is here and here. Basically this is intended to detect undocumented station moves and “non-climatic artifacts” (such as UHI).

Adjustments are determined by estimating the magnitude of change in pairwise difference series form between the target series and highly correlated neighboring series that have no apparent shifts at the same time as the target.

As an example, here is the overview comparison plot for Lifton, Idaho. The Read-me file says (bold mine):

See that bit in bold bothers me. What if warming is already so hard-wired into so many sites,  especially rural sites due to village growth or land use changes, that it is taken for granted that a warming trend is ‘normal’ and that all adjustments take place against that warming baseline anyway?  Roy Spencer certainly argues that Warming in the USHCN is mainly an artifact of adjustments.

Given the amount of work NOAA has put into the USHCN dataset to increase the agreement between neighboring stations, I don’t have an explanation for this result.

While scientific methods dictate the necessity of being objective in the treatment of data sources, I wonder if that is what is wrong here.  Perhaps the studies that fail to find an effect of UHI are not paying enough attention to the detail of categorisation.  All apples you say? Would a closer look reveal cookers, desert apples, cider apples and crab apples?

If there is no such thing as a ‘typical’ city or rural station, does being objective make it all too easy to miscategorize?  Maybe a modicum of subjectivity is the reason for the success of skeptic bloggers such as Ed Caryl (A Light in Siberia) and Frank Lansner (RUTI: Coastal Stations) in finding ‘warming artifacts’ of human influence or location.  Perhaps Dr Spencer has succeeded because he looked at US data in a relatively short time period in which it was possible to pin down urban growth, while Jim Goodridge stuck to counties in California.

Averaging and anomalising temperature data for a station and combining it with that of other stations certainly hides a lot of detail. IMO the heterogeneity of urban growth and geographic differences between urban areas means that we must break down data by location and treat it with some subjectivity to see the variability and detect the messages within.