Watching a Channel 4 programme about recent weather, and specifically the claimed increase in rainfall in the UK. Devon and Cornwall in the South West have been particularly badly hit.

I went on the Met Office’s website and downloaded the UK rainfall data, available at daily resolution from 1/1/1931.

I looked at the most rain in any one day during each month and the total rainfall in each month.  Because the data is so variable, I calculated the 5 year rolling averages, shown below in red and black.

Looking at detail for the South West I calculated rolling quarterly and 12 month averages: 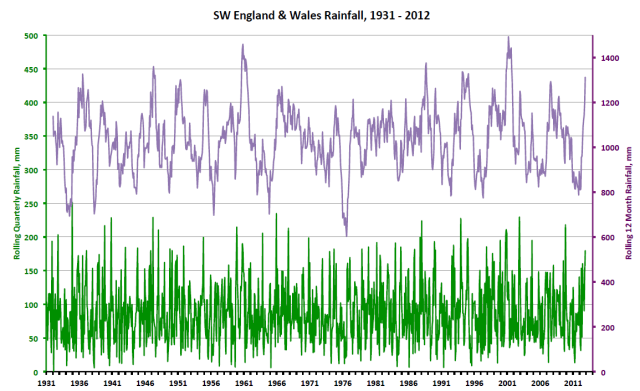 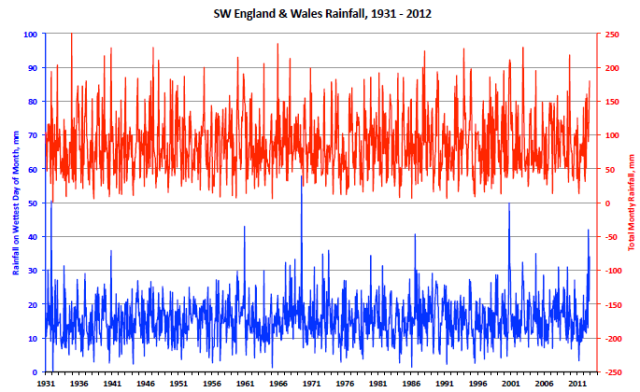 This years monthly totals for the South West are plotted below with the average monthly rainfall and one standard deviation on either side of the average.

Whilst looking at rainfall data, I thought I’d look to see if there was a trend in the number of days of rain.  It’s actually very quick and easy to do.  I downloaded rain data from:

I imported it into Excel, then at the at the right hand end of the data created a column labelled “year” and one “dry days”.  I just copied down the year from the left hand column, and used COUNTIF(range, 0) to count the number of dry days in each month, then did a pivot table to get yearly data.  The result was dramatic:

Graph showing the number of completely dry days (as measured by the available instrumentation).

SW, SW and Central, and they all look the same as the method of measurement up to the 1990s could not discriminate <1mm in accuracy.[Clarification/correction added]. The Met Office clearly changed their instrumentation to a method that could measure <1mm per day accurately; there was a gradual update to automated gauges with a 0.2mm resolution in the 1980s and 1990s. If one plots “less than 1 mm of rain” there is no trend. It shows there has been no change when the previous measurement criterion was used.

Graph showing the number of dry days with <1mm of rain.

Despite claims of increased rainfall it doesn’t look like there’s anything exciting in the data.  I suspect the problem (increased flooding and therefore apparent increases in rainfall) lies with 1) building on flood plains, and 2) covering every flat surface with tarmac or concrete for car parks, roads etc, thereby reducing the area of soil to absorb said rain.

This entry was posted in Uncategorized, Weather and tagged Met Office, rainfall. Bookmark the permalink.

10 Responses to The Rain Gain Refrain