An update to previous analysis and also this time looking at temperature.

A few days ago I posted an analysis of the Met Office’s rainfall forecasts.  I realised after the event that I had used actuals from England and Wales, not the UK, so here’s the revised version.  This time we are comparing apples with apples!

Using the 3-month outlooks[i], published monthly by the Met Office, I looked at the most likely rainfall and temperature for the first month of each; in other words their forecasts in a window of one to six weeks out.

I then compared these to the actuals, also from the Met Office website[ii],[iii].

Rainfall is very variable, and therefore harder to predict, than temperature, which varies little year on year.  The Met Office’s forecast seems to be based on previous years (1910 – 2011), with a correlation coefficient between the two of 0.77.  In the event the actuals were, of course, much higher than either previous averages or the forecast: 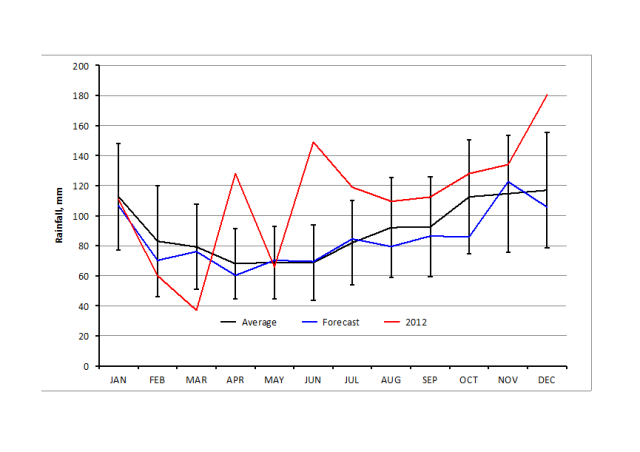 As a result, the correlation between the forecast and actual was a poor 0.14:

By contrast, a scatter plot of forecast vs actual temperatures yields an impressive correlation coefficient (R2) of 0.95:

In the graph below, the average is the mean temperature from 1910 to 2011, with the standard deviation shown as error bars.  Also plotted are the Met Office’s forecast and the 2012 actual temperatures: 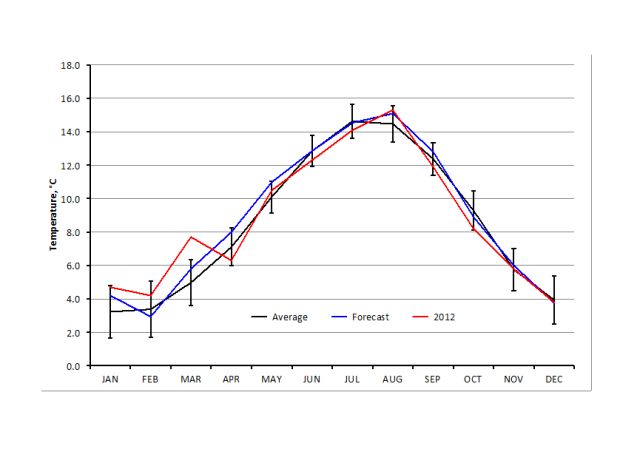 The correlation coefficient between the historical average and the forecast is 0.985, and between the mean and the actual is 0.94.  This suggests the forecast for 2012, whilst accurate, was not significantly better than just taking the average of previous years’ temperatures.

Generally temperature varies little from year to year; the standard deviation of year-on-year changes is just 0.35°C.   The Met Office’s forecast for 2012 of 8.8°C was not only more that 2 standard deviations from 2011, but surprisingly accurate; 2012 turned out to have an average of 8.7°C.

The forecasts and actuals for 2012 suggests the Met Office are reasonably accurate at predicting UK temperatures for the next month, but woeful at predicting rainfall.