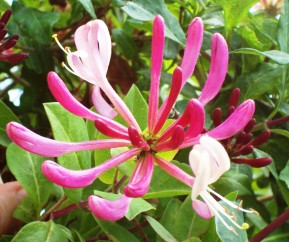 Thanks to the wonderful weather, and the recent run of cold winters, my garden honeysuckle is glorious this year.  The evening air is delicately perfumed by it, with the scent even wafting through the bedroom window at night. 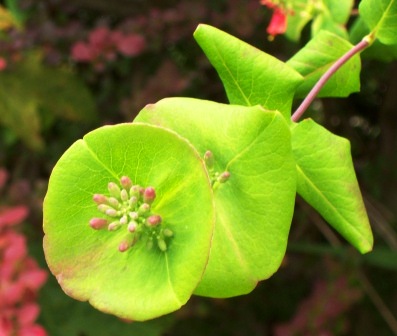 There are three plants that have taken over the garden trellis and hedge: a pale yellow one of unknown origin, possibly wild, that forms an unruly mass and threatens to take over, a more compact pink one from my mother’s garden, and one which I’d never fully appreciated before.  It has spent years covering an archway quite anonymously.

Each year we’d see flower buds form only to be enveloped in a blue-black mass of aphids.  The few blooms that did struggle through were paltry, malformed things. Last Spring, and even more so this year, the plant has won out against the pests and has erupted into a spectacular covering of scarlet flowers that glow luminously in the evening sun. I can only guess that the cold Winters have reduced the numbers of aphids, and particularly the numbers overwintering and able to take advantage of mild weather to  proliferate  rapidly.

Some of you will remember a GM controversy in the early 80s, when it was proposed to release a genetically-modified strain of ‘Ice-minus’ bacteria that was promoted to reduce frost damage to plants.  This followed the finding that both natural and GM strains of a certain bacterium (Pseudomonas syringae) lacked a surface protein that helped ice crystals form. It was proposed to supplant natural bacterial populations on crops with Ice-Minus strains to reduce frost damage.  The converse of this is that natural stains of ‘Ice nucleating bacteria‘ are useful for cloud seeding, snow-making, since the surface proteins catalyze ice formation at only a few degrees of frost. They’re also found naturally in clouds.  Here’s there effect on supercooled water:

A further potential application was plant protection against aphids.  That last idea seemed to be an answer to global warming.  The theory went that, as winters got milder, aphids would be more likely to survive and cause increasing damage.  However, if you used a spray of bacteria on an otherwise frost-tolerant crop the aphids could be zapped say by a -3°C frost as the bacteria overcame the propensity of water to stay in a supercooled liquid. The bacteria promoted ice formation on the aphids and the crystals penetrated and kill the pests.  Without the bacteria, it would require a frost of -5°C to result in the same degree of ice formation.

Of course nature always does her own thing, and the cold has returned in recent winters.  And there are winners and losers in every game.  I might be enjoying the visual and aromatic feast of the honeysuckle, but the soundtrack is missing.  There’s no loud hum of bees. Honeysuckle without bees – it seems wrong somehow.