Here’s an odd thing. Having experienced such cold weather on holiday in July, I went to take a look at the Met Office maps and graphs, and the UK mean temperature map for July 2015 was a bit of a surprise – it was quite rosy and warm-looking.

The map of anomalies, however, told a different story:

That was more like what I was remembering – colder than normal in most of the country.  I suppose most people would forget it and move on. Having checked other months there was a similar picture and I got to thinking about the choice of (actual) temperature range for each of the colour bins.

According to the Met Office summary for July,

But this is only one month. Let’s look at a few more. Is there a clear rationale in how actual temperatures are represented by specific colours on the maps, or is there a bias towards an overly rosy picture? 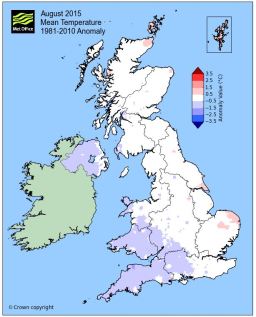 For August (UK average just below 15°C – light pink bin)  actual temperatures are represented by an over dominance of pinks, suggesting  warmer temperatures when the anomaly maps tell different story.

For earlier in the year, looking at actual temperatures, you’d be forgiven for thinking January 2015 (UK average just below 4°C – light pink bin) was very warm in Britain, when actually, from the anomaly maps, it was just average. 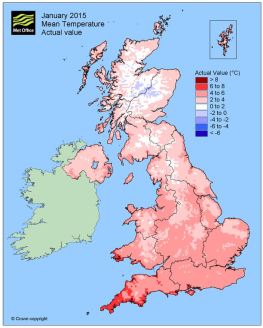 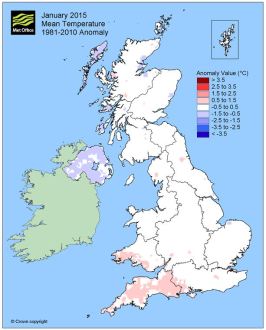 Conversely May 2015 (UK average just over 9.5°C – light pink bin) looks very warm, when it was much colder than average.

But then these two types of maps are meant to tell a different story. One end of the country is generally warmer than the other and the upland regions in Scotland will always be cold, but how much of the map should be pink or blue, and does it matter? For anomaly maps, the colour bins are standard covering a narrow one degree range, but for actual temperature, the bins are broader covering a two degree range. Still the choice of which bin colour represents the dominant map colour will bias the map.  Is there any logic that would explain the choice?

While I think of it – is it not just a little absurd to have dark blue and dark red representing <-6°C and >8°C respectively in January, but <+6°C and >20°C in July.  Green and yellow are used successfully on other temperature scales to represent intermediate colours.

“But we’ve always done it that way” 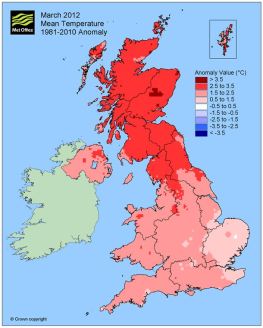 What about a few really cold ones – remember December 2009 and December 2010? 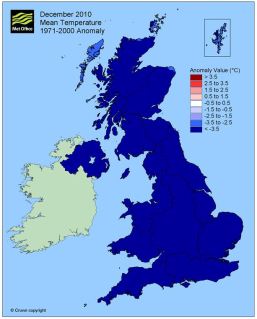 Hehe. These months sure shook things up a bit,  actually forcing the use of white as the bin colour for representation of the average temperature. And that is the point – looking at the maps, way back to 2001, generally the map and the colour bins don’t change and the most frequent colour used for ‘average’ is light pink.

I blame that Met Office obsession with climate change.

This entry was posted in CAGW, Climate, Weather and tagged Met Office, Temperatures. Bookmark the permalink.